Pumpkin is a sweetheart. When we went to collect her, when she was still tiny, Aimée held her in her arms all the way back to the other side of Devon. However, to ensure she would realise she was my dog too, Aimée insisted that I hold her for the rest of the afternoon. 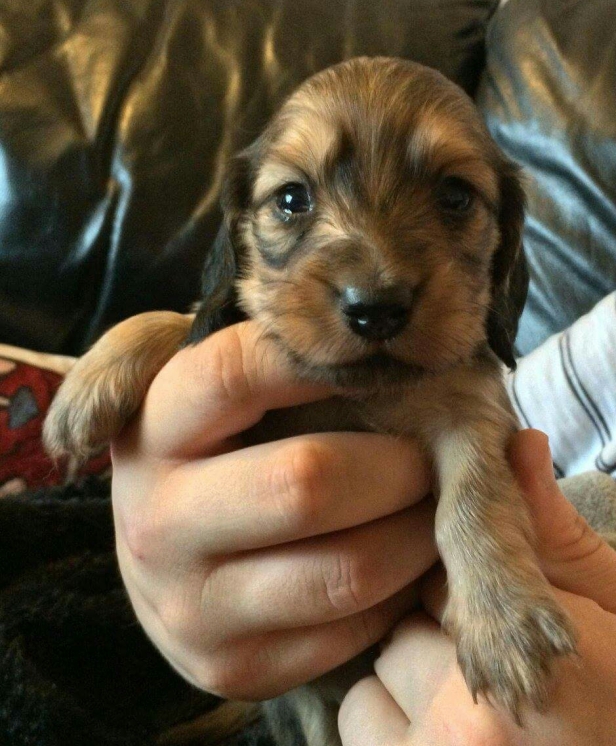 Inevitably, all the dogs fall for Aimée. She will protect them from loud noises, she’ll play with them, she’ll walk and feed and entertain them. I would do all of that but, let’s face it, they prefer Aimée. I’m the one they come to when they need help.

When Poppy hears a noise outside, she cries at the door until she realises I’m somewhere nearby. Then, she comes to me and cries until I take her to the door to show her that no one’s there. When Pumpkin had her first season, she rushed about the sitting room like a maniac, seemingly, trying to escape from her back end. She only calmed down once she got up on the sofa and lay down behind my neck.

When she was very small, Pumpkin and I went to puppy training classes. Being a miniature dachshund, and only a few months old, she was tiny. Certainly compared to the other dogs, it was questionable… whether or not she was a dog.

Anyway, as the other dogs were learning recall, and their owners were learning to sound excited in public (which is decidedly un-British and frankly, embarrassing), Pumpkin and I waited for our turn.

How it worked was the dog would be held by the trainer, with a long line attached to the collar. The owner would crouch at the opposite end of the field and call for the dog, sounding excited. At this point, the trainer would release the dog, but hold on to the end of the long line, just in case. Eventually, the dog would come back to the owner. None of them went missing anyway.

When it came to our turn, we found that the clip of the long line was too heavy for Pumpkin to carry. And so, having assured the trainer that Pumpkin was great at recall, we went without the long line. All the other dogs were on their leads, and there was no way that Pumpkin would go anywhere near them. I know my baby. When I called for her, she raced over, ignored the treat and licked the living daylights out of my hand.

When we were presented with the certificate of attendance (which, let’s not kid ourselves, only means that we went), I’d rarely been so proud.