When I was eighteen, or thereabouts, I had a couple of friends over. They stayed for a few weeks, during the course of which, I cooked a lot, smoked a bit, and didn’t drink a drop. I saved that for a few years later.

During their stay, my buddies introduced me to two amazing TV shows. I know, I’ve said many a time that I spent much of my life watching television. And it’s true. However, having missed the opening episodes and even seasons of these two, I hadn’t yet got into…
Buffy The Vampire Slayer 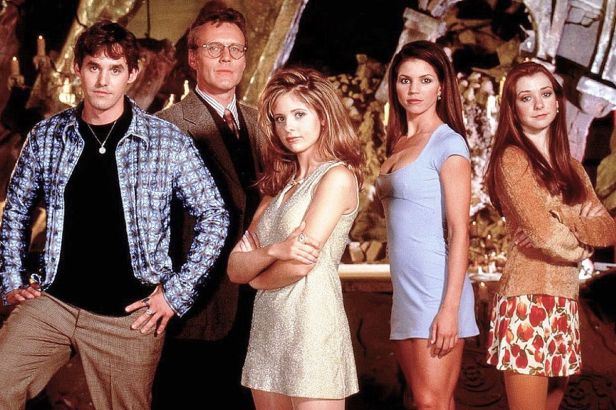 Looking back, it’s as if I’d been living on the Moon.

Great characters, snappy dialogue, superhero stuff, infinitely quotable and a tiny blonde who kicked all kinds of bottom every week. It often happens. I’ll be sitting in the car or buffing the bar at the Legion, perhaps stirring something on the stove, and a string of words will pop into my head. It used to take days of thinking. Running the words through my brain, again and again until I finally realised, it was something Xander said. Or something Willow said. More often than not, it was Spike.

At the time, we used to watch The Simpsons on BBC2, followed by Buffy, then dinner, and we’d round off the evening with a film or, if it was a Wednesday, er.

I knew who many of the key cast members were. George Clooney and such. They’d been in every magazine with a cover for six years at that point. However, I hadn’t watched it because I didn’t realise it was the sort of thing you could just jump into.

I grew up believing that Casualty was the epitome of medical drama (it is) and, later, that its spinoff, Holby City, was the best thing including Casualty (it is). Also, my parents had an unfathomable aversion to American TV, so I hadn’t seen anything approaching er.

At the time, Kerry was emerging from the closet and Mark Green was getting sick.

My buddies, M. and L. wanted to watch it – due, in no small part, to the presence of Goran Višnjić. It was, I suspect, the intoxicating mixture of accent and eyebrows.

Anyway, after M. and L. left my place, I continued watching both Buffy and er. Buffy was funny, clever, action-packed and deserved its own dictionary.