Skip to content
Date: March 9, 2019Author: pbinney 0 Comments
When my parents were dating, they did as couples often do, and introduced each other to their families.
My dad brought his parents over for dinner. My mother made a sort of bolognese thing, served in a marrow. I’ve tried to make it myself. It took four hours to get the marrow to go from solid as a rock to melting through the wire rack. You know how pears are when you buy them in the supermarket? You could knock a nail in the wall with them, and then, all you have to do is leave them in the fruit bowl, on their own for a few minutes, and they turn to mush? Like that – but cooked. And a marrow.
Anyway, my mother made this marrow thing for my grandparents. At the end of the meal, my grandfather put his napkin to one side, thanked my mother and said he couldn’t possibly manage another bite. My mother had the panic that comes to us all – convinced he hadn’t had more than a spoonful, and rose tentatively to take his plate. It was clean. He’d practically taken the pattern off it.
My grandmother, on the other hand, called my mother by the wrong name for the first three months of their engagement. Just to see if she was a keeper.
When my mother introduced my father to hers, the men struggled to find common ground. True, my dad had been in the RAF and my grandfather had been an aeronautical engineer, but they didn’t exploit the link. Instead, my grandfather, who had spent much of his marriage playing correspondence chess with people all over the world – creating for my mother a stamp collection that was the envy of the county, and a level of silence in the household – decided to teach my father to play the game. He bought him books on strategy, and spoke at length about various styles from Russia and Germany.
My dad wasn’t one to sit for any length of time so chess was never really his forte, but he tried. And over the top of the curtains at the back of my sitting room, I have the family chess set. My mother made it when she was skiing in Norway. She could have only been twenty-four at the time. These pieces have survived several house-moves and almost sixty years, but they’re too pretty to play with.

And then, quite recently, I saw this: 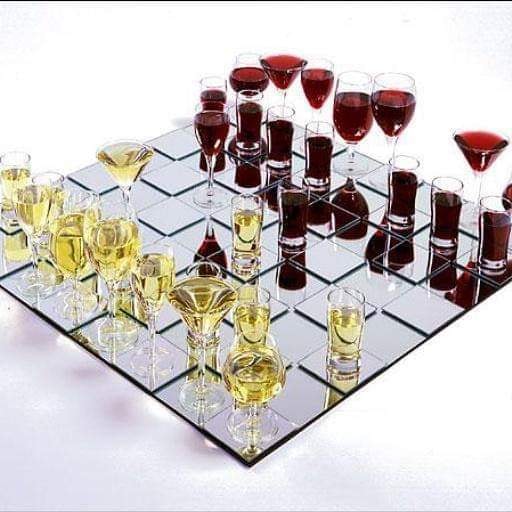 My strategy has never been all that great, but I think I could risk taking up chess again…
And there you have it. Day #68 of #365HappyDays – Chess.