Seventy days left in the year. Have you ever wondered what could be accomplished in seventy days? Me neither, but maybe this is an opportunity for all of us to try something, anything, for the rest of the year. If it takes, yippy – there’s something to do next year. If not, at least you’ve given it a go.

Fact is, if you don’t try at all, you automatically fail, so you might as well try. Maybe it’s just me – I have a weird relationship with time – but seventy days feels like a lot less than ten weeks. Ah, think about it however you like, let’s try something.

Anyway, getting back to the main event – corn on the cob.

Fabulous stuff. Haven’t had it in years but it’s magical. When I was little, we had little cob holders that were, in effect, tiny swords.

They were so cool. Then, my mother, in a fit of fad, bought a pack of cob holders that were in the shape of corn-cobs, but came equipped with a screw thread and confused the whole damn family. 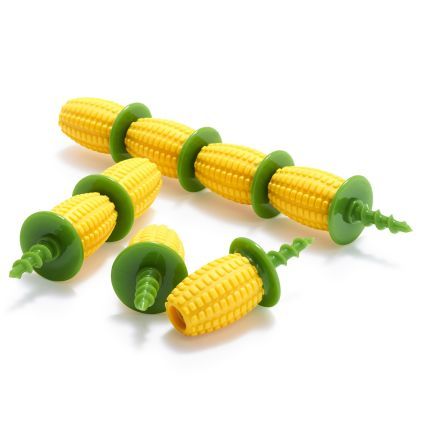 Screwing something into corn on the cob is – not right. Stabbing it is much better. That probably says a lot more about me than I need it to, but there it is.

In any case, corn on the cob, a good scatter of black pepper and a dangerous amount of butter, is perfection.