When death, darkness, and danger ensues, it must be time for canapés…Trapped in a loveless marriage, while harbouring a secret, Fiona Weaver-King is ready for something – someone – new.

Despite her success in the prestigious art world, Fiona lacks the confidence to forge a promising new path, due to the ridicule she has endured from Roland, her disappointing husband of two decades. However, there’s no ignoring the fact that the only spark she’s felt in years has been ignited by her beautiful and spirited neighbour, Jennifer Nugent.When a dead body surfaces, the quaint Devonshire village of Amberleigh is filled with gossip and suspicion, and with so much thrust onto the back burner, the only solution is a dinner party. But could the killer be seated nearby, telling witty anecdotes and passing round the canapés?Book One of the Sex, Death and Dinner series.

USA: https://amzn.to/2olxxHK
***
Book Two – Sex, Death & Scallops
A corpse, a seduction, and a plate of scallops…With Roland King missing, and Jennifer Nugent headed to Amalfi with her husband, Fiona Weaver-King works hard to keep herself above suspicion.Pottery and sauvignon can only go so far, but with a dozen new portraits hanging in the studio, and her garden equipped with a brand new quail run, as far as the village of Amberleigh is concerned, Fiona is far too busy to dispose of a body.Only with the appearance of the strange and voluptuous Kitty Fairoc does suspicion begin to grow. Who is this unusual woman, with her keen eye and ready smile? An undercover police officer? A roving reporter? Or is she simply, and alarmingly, a flirt? And what does she want with Fiona?Book Two of the Sex, Death and Dinner series.
Released, September 2018 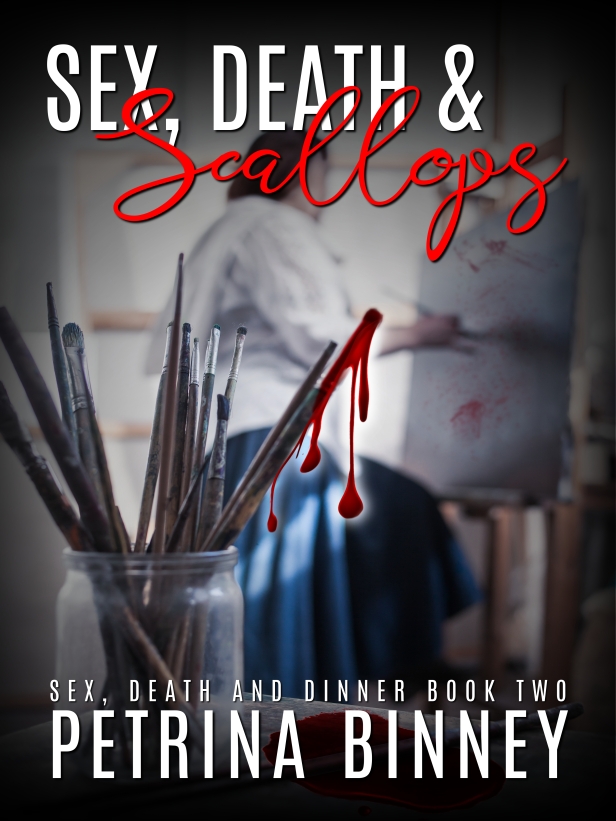 UK: https://amzn.to/2xdxnXu
USA: https://amzn.to/2NI8gS2
***
Book Three – Sex, Death & Venison
It’s Winter in Amberleigh. Snow is falling, the sprouts are bubbling, and the stockings are made of silk.
With the possibility of a new relationship, Fiona Weaver-King is within inches of the life she has wanted all along. But with a hidden camera secreted in her bedroom, a tracker on her car, and a thorough investigation into her background taking place behind closed doors, no part of her life is fully her own.
Alone in a dingy flat some miles distant, Kitty Coriaf watches the world on a series of screens, sketching out ideas on a large whiteboard, and living off stale popcorn and week-old takeaway. It’s shaping up to be one hell of a Christmas.
Book Three of the ‘Sex, Death and Dinner’ series.
Released, January 2019

Where it all began…

Sylvia Shapiro is knee-deep in her second marriage, and floundering badly.

Fiona Weaver-King is more certain every day that she has made a dreadful mistake in moving to the countryside with Roland.

With the finest of the village expected for dinner, and a teenager slouching in a cummerbund, Sylvia is convinced she can fix her marriage by showing her husband how happy other people are in their relationships.

If only he can stay awake until pudding…

Noir comedy, lesfic novelette, with poetic prose and excellent table manners. The Girl With All The Cleavage is the prequel to the ‘Sex, Death and Dinner’ series. Not suitable for under 18s.